On Saturday evening just past, our A and B teams the Gallow Lasses and the Bonnie Brawlers took part in the Double Decker in Christchurch. Unfortunately not all of our players could come with us as one of our Brawlers, Lady Flingher, suffered an injury during training. We will cover the Double Deckher in our next post but for now, here are a few words from Lady Flingher herself...

So Derby takes over your life; skating becomes your happy place, the thing that gets you through everything else. It becomes your family, your friend, sometimes even your worst enemy. You lose some friends you had before you started skating because they can't understand why you can't drink the night before training or why you’re so busy all the time; but you gain friends who understand all that because they skate too. And it's all worth it because you get to skate...You realise that the saying 'Derby saved my soul' is really true....Derby and skating is the best thing that happened to me mentally, emotionally and definitely physically. I trained hard, I ate smart, I became comfortable in my own skin, I gained confidence, I developed passion and drive; above all else I was happy....It’s not often that I have been able to say that, but derby gave that to me

So what happens when in a second all that suddenly goes away?

I have been skating for just over a year with Dunedin Derby, still pretty new to the sport, and had just been put into our newly formed B team the Bonnie Brawlers. We were training hard in preparation for our game in Christchurch at the end of September. 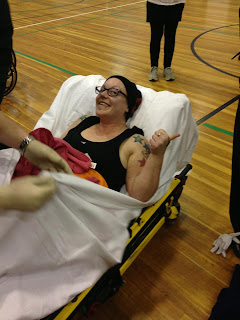 Just  recently, 2 hrs into a league training and six weeks before my first interleague bout, I fell and stuffed my ankle.

Unfortunately I remember all of it including exactly how it felt. As much as I was hoping it would be ok, I knew I had done serious damage, I had heard the crack as I fell on it. I was so disappointed and angry at myself for falling the wrong way. The DD girls were amazing during the two hour wait for the ambulance, they sat in very uncomfortable positions holding my leg because I wouldn’t let them move me, they calmed me down, lightened the mood, basically they demonstrated how much of a family our league is and how we care for one another. It can't have been nice for them to see one of their team mates go down like that. So I want to say a big thank you to all of them 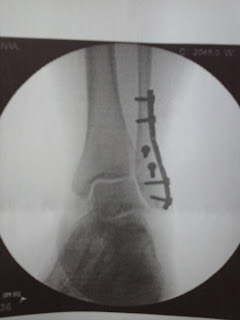 X-rays confirmed I had snapped my fibula, dislocated my ankle and damaged the ligaments and tendons, they told me I needed surgery to have a plate and screws put in – Every skater’s worst nightmare was happening to me. The doc told me I'd have at least six weeks in plaster with no weight bearing, a couple of weeks in a moon boot then a lot of physio. He told me I may be able to leisurely skate again in 6 months but I would not be back to training and playing derby for 9-12months, till they were able to go back in and remove the screws.

Heartbroken doesn’t even sum up how I felt

Now I’m not silly, I know that this isn’t the end of the world and that there are so many people out there who are worse off than me but for me, and as a skater, this is a very hard pill to swallow. I don’t know how to explain it to a non-skater but if you are a skater, then I imagine you could understand how this would feel.

I am currently 2 weeks post op so I am still trying to heal and process what has happened. I don't know how to fill the void of skating; I can't picture my life without skating. I can't go to training because it is too emotional and hard for me to watch, knowing it is going to be so long before I can join them on the track again. But the longer I stay away, the more disconnected I feel from what has become my family and my passion.

Not skating is not an option for me, so there is no doubt in my mind that I’ll go back. I have had people who don't skate ask me if I'll skate again and they seem shocked when I say yes. My injury is not derby's fault nor was it the result of a lack of skill. It was a random act or a freak chance of falling slightly the wrong way, and could have happened to anybody. The hardest part will be having to wait till I can skate again and the fear when I do skate again.

All I can do now is rest, recover, try and focus my time and energy into my family and studies, support my team mates and league in their upcoming bouts and wait. I have to figure out how to deal with the anger and heartbreak that I feel because of this injury, the void it has left in my life and the fear of hurting myself again when I do get back on my skate but I won't let any of that stop me from playing the sport that I love.